Char-Broil Signature TRU-Infrared 325 review… You love taking your celebrations outdoors — at your backyard, to be specific. You love the smell of barbecued pork, the sight of grill lines on your patties, and the sound of sizzling meat while you and your family share quality time together.

All this is mostly because of a reliable outdoor grill. You heard about the Char-Broil 2-Burner gas grill, and you’d like to have one for yourself. How did it fare among previous buyers? Allow us to give it to you in this Char-Broil Signature TRU-Infrared 325 review.

Key Features: What to Expect

Let’s start with some notable features. 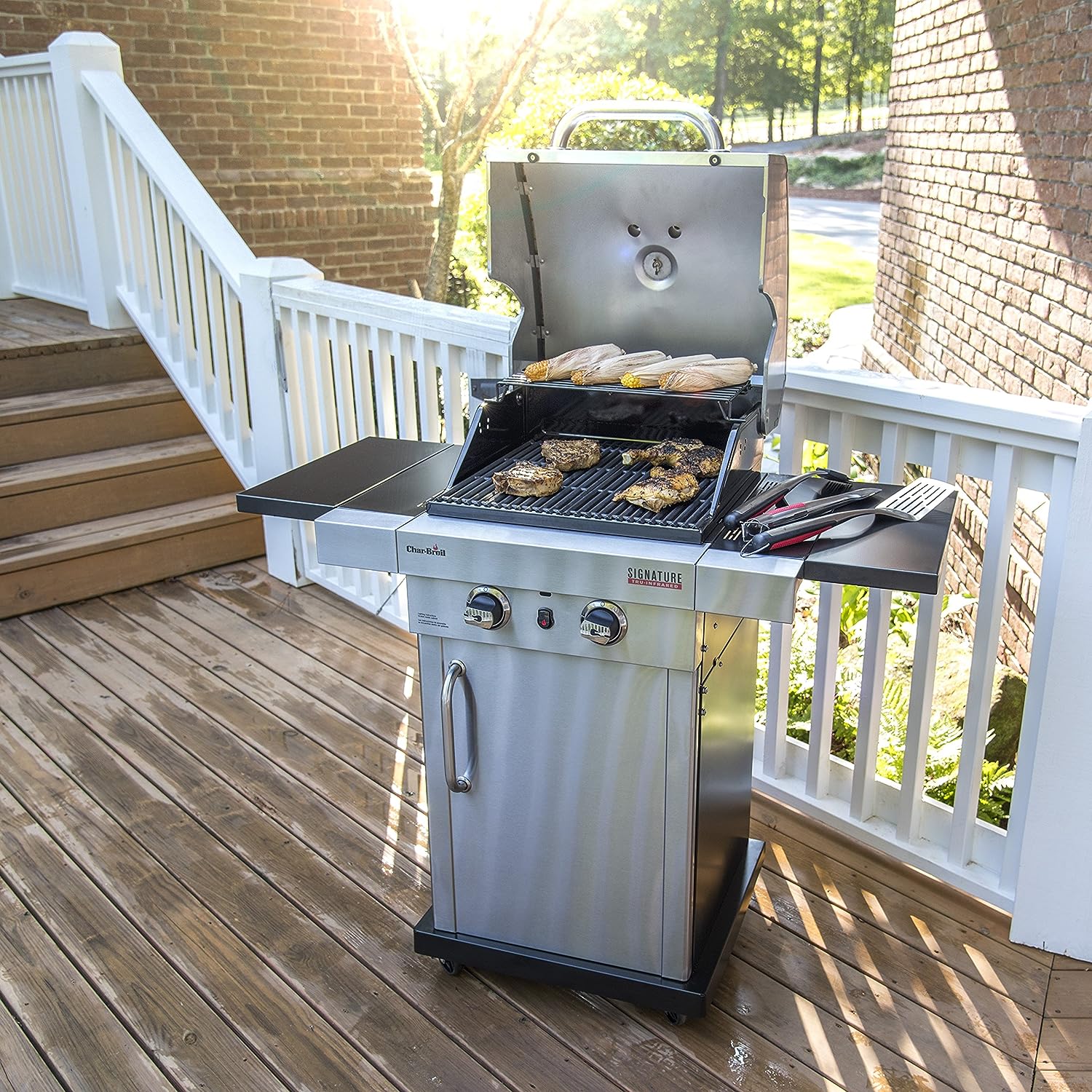 An impressive feature, the TRU-Infrared cooking system uses the power of infrared to ensure at least two things: one, greater temperature control; two, usage of less gas. The expected result is even cooking at a faster rate.

How is this possible?

As explained in the video below, the Char-Broil Signature 2-burner gas grill is equipped with specially designed cooking grate whose bottom part captures gas molecules and then radiates it to the food on top. Unlike a traditional grill, the Char-Broil’s grates are equipped with small holes whose task is to slow down the hot gases so that heat is transferred to the other parts of the grates, and eventually to the food.

VIDEO: How Does TRU-Infrared Technology Work?

In this video below, a Char-Broil engineer explains how the TRU infrared cooking system works.

As advertised, this 2-burner Char-Broil gas grill is “a smaller-sized solution for the master griller.” Though this may be the case, expect solid construction and several truly useful parts and functionalities.

For instance, it has two shelves – left and right – that you can fold when not in use. It also comes with an enclosed storage cabinet that’s large enough to house items that you use when you grill. And to make sure you can easily move it from one place to the other, this outdoor grill comes with 4 casters.

Expect the grates to provide you with a large cooking area – 325 square inches, to be exact. Aside from that, there’s also a warming rack that gives you a 120-square inch space.

To complete this Char-Broil Signature TRU-Infrared 325 review, we went through comments and feedback posted on a popular online retailer. Here’s a summary of what we found out.

On the TRU-Infrared Cooking System

The first question on everyone’s mind is this: Does the TRU-Infrared technology work the way Char-Broil claims to? Apparently so. According to one person who went out of his way to measure the surface of the grates, the temperature reached 750 degrees Fahrenheit in just under 10 minutes. It’s that fast.

What about flare-ups? You won’t have them with this grill, based on accounts of several buyers.

Does it cook well the way it said it would? From one person’s feedback, with this 2-burner Char-Broil grill, there seems to be a learning curve when it comes to the cooking time. But even if you try to do some initial testing, you’ll have grilled food that comes out reasonably well.

Is the resulting food really juicier? According to one person, the answer is yes.

Previous buyers have mentioned assembly several times, so it’s only appropriate that we summarize what they said. While some people described the assembly process to be straightforward, the assembly time varies from one person to the other. One buyer said it took him about 45 minutes, and another said it took his wife 3 hours from start to finish.

Here are some of the complaints raised by previous buyers.

As previously mentioned, assembly can take time, so it’s best to have someone help you.

Here’s what we have to say.

If budget is not a concern, consider getting the Char-Broil Signature TRU-Infrared 325. It’s TRU-Infrared cooking system works, and to borrow the words of a buyer, it cooks like a charm. 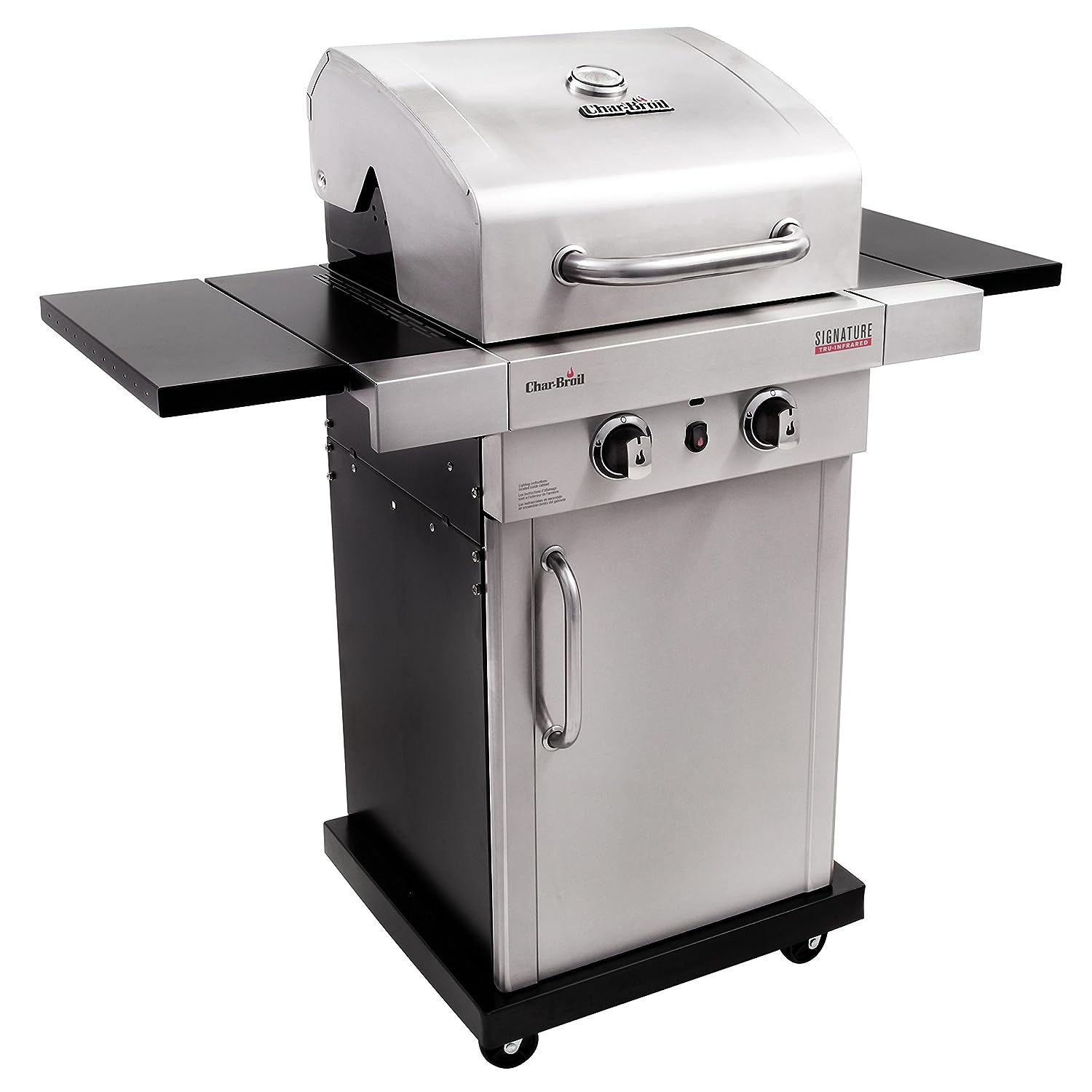