In the image above, it appears that there’s a festival or a fair of some sort. If this event allows grilling and cooking your own food, participants definitely need a portable grill.

Are you by any chance looking for a griddle that you can take with you at a big event such as what’s implied in the picture? If so, you’re probably looking at the possibility of purchasing the Blackstone 28-inch griddle.

As advertised, this appliance is a 2-burner with a flat top. Should you get one? Before making a decision, let’s give you some details about this product — the most important of which is the feedback of previous buyers — in this Blackstone 28 Griddle review. Also, in the last section, we include a comparison chart between the Blackstone 28 and the Blackstone 36 griddles. 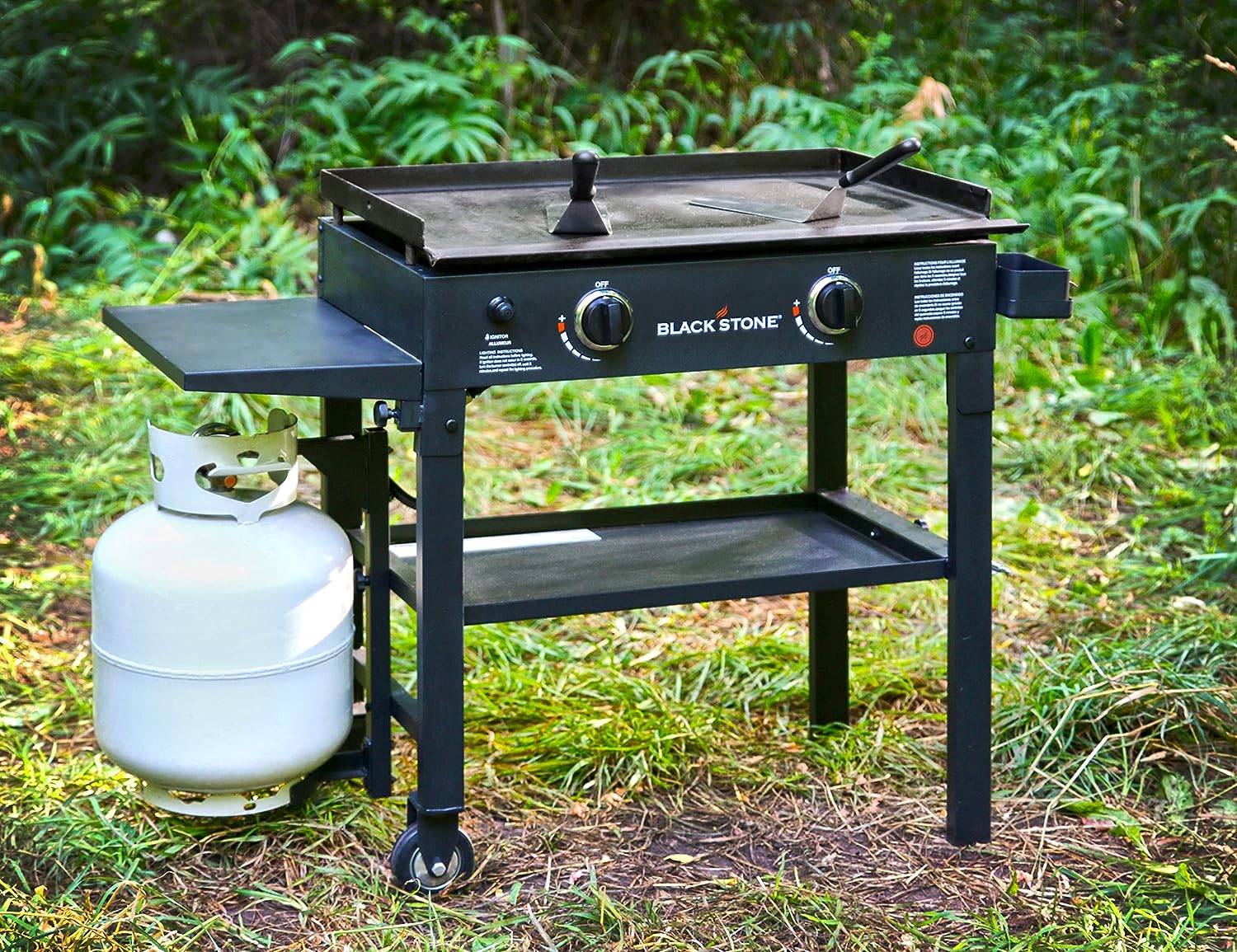 There’s a debate as to which type of grill or griddle makes better burgers – flat top griddles or charcoal-type grills. In the end, it boils down to preference.

But some people go for flat tops because they say these cooking machines hold moisture better than charcoal, and only a thinner outer crust develops on burgers. In addition, flat tops are said to make even-cooked burgers.

Ironically, the biggest disadvantage of flat-tops is also related to flavor. Sure, they result in juicier burgers, but they lack that charred and smoky characteristic taste that charcoal grills can give.

How big is the Blackstone 28 griddle‘s cooking surface?

As advertised, it comes with a 470 sq. in. cooking area. Since it’s a flat surface, you can use it to cook eggs, pancakes, grilled cheese, steak, potatoes, and other food items you can’t cook on crates.

The Blackstone 28-inch griddle is equipped with 2 burners that you can control individually. Each of the burners is rated to produce 15,000 BTUs, making it 30,000 BTUs in total.

This griddle runs on propane gas. You’ll have to get a standard 20-lb. propane tank to enjoy its benefits.

This is not a cart-style grill. However, it comes with two wheels, which should help in mobility. The other legs are wheel-less to help with stability.

Pros and Cons of the Blackstone 28

What do previous buyers say about their Blackstone 28-inch griddle? In summarized form, here’s what we found out.

Advantages of the Blackstone 28 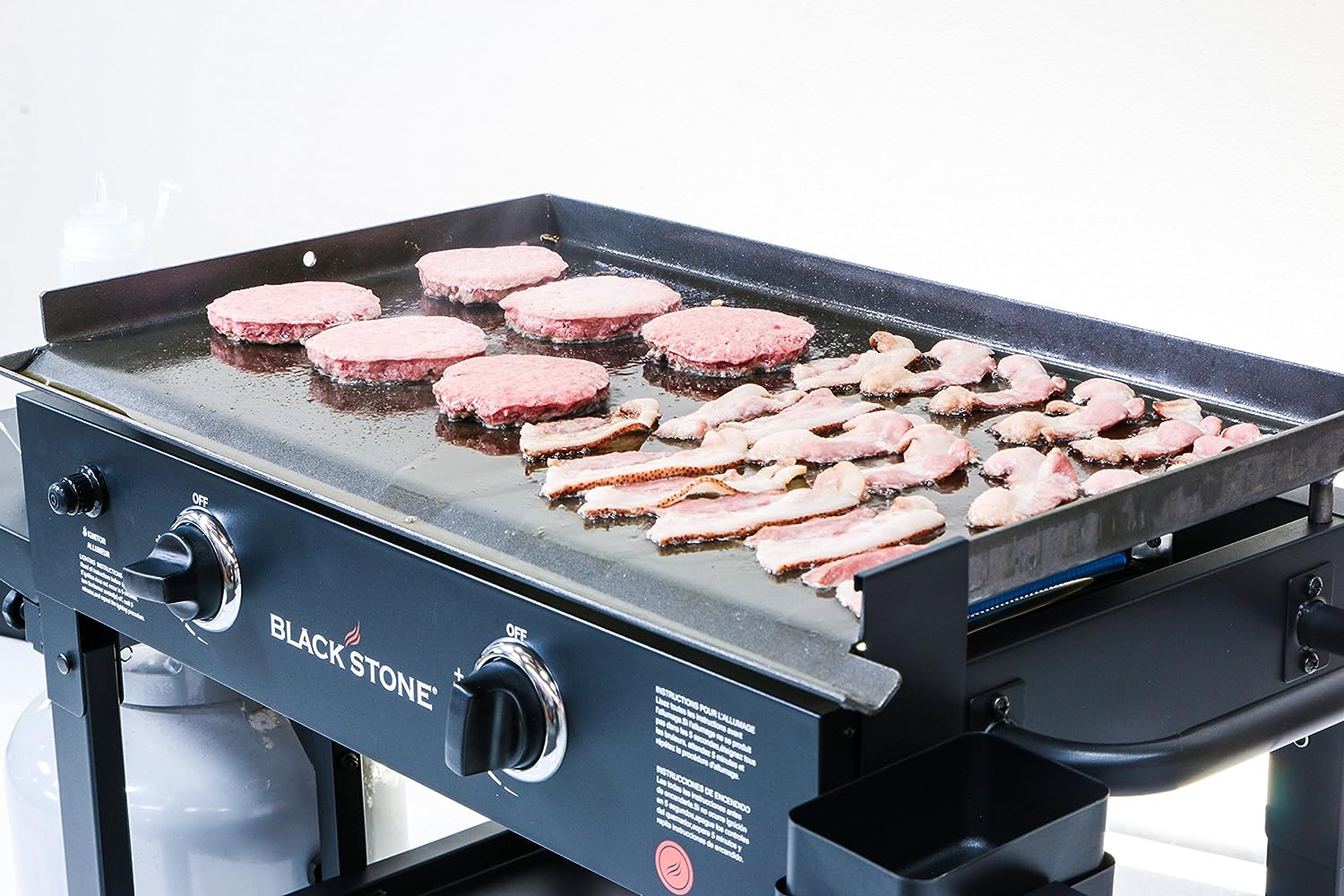 It’s surprisingly portable mainly because of its foldable legs. But although you can transport it to and from a camping site anytime you want, note that it’s heavy. Plus, according to a seller, this griddle is meant to be stationary.

There is assembly involved, but it should be easy.

How long does it take for this griddle to heat up?

There’s no consistent answer from previous buyers, but generally speaking, the Blackstone 28-inch griddle “heats up pretty fast.” Some say 3 minute, and others estimate it to be around 7 minutes.

Is it easy to clean?

Apparently so. Different people employ different techniques, which involve a series of steps. But it shouldn’t be difficult. For instance, one person said he uses water and a stiff brush to make sure that the residue is taken out.

Does it really cook burgers (and other food items) well?

Here are some comments.

From one person: The more you use it, the more flavorful the food you cook. Another person said he can’t say enough of how good the resulting food tastes.

In general, previous buyers love how versatile this griddle is. It can cook tons of food items, from bacon to even hash browns. To borrow one person’s words, this grill allows you to “recreate food fair.”

This is a big one: One of the main issues is about the grease drain. It can get clogged with food residues. When this happens, the oil can drip down the griddle’s legs.

The Blackstone 28 is not a grill-griddle combo. As advertised, it’s a griddle. It comes with a flat surface that’s perfect for breakfast-type food items such as bacon, burgers, and pancakes. The good news is that Blackstone makes a grill top that you can interchange with the flat surface. You can purchase one here.

Can this be converted to natural gas? According to Blackstone, doing this is not recommended, so you’d better stick to propane gas.

This griddle doesn’t come with any other accessories. If you need a cover to ensure it’s protected against rust, you can make a separate purchase. Get this heavy-duty 600D polyester cover for the Blackstone 28.

To end this Blackstone 28 Griddle review, let’s answer the ultimate question. Should you get one? Here’s our recommendation.

It’s a yes for us. Get the Blackstone 28 griddle. It’s not too large, and it’s not too small either. Plus, it’s a versatile cooking tool, which allows you to cook a variety of food items. The only main problem is the grease drain. But you can fix this by purchasing a Grease Slide Griddle Mod. 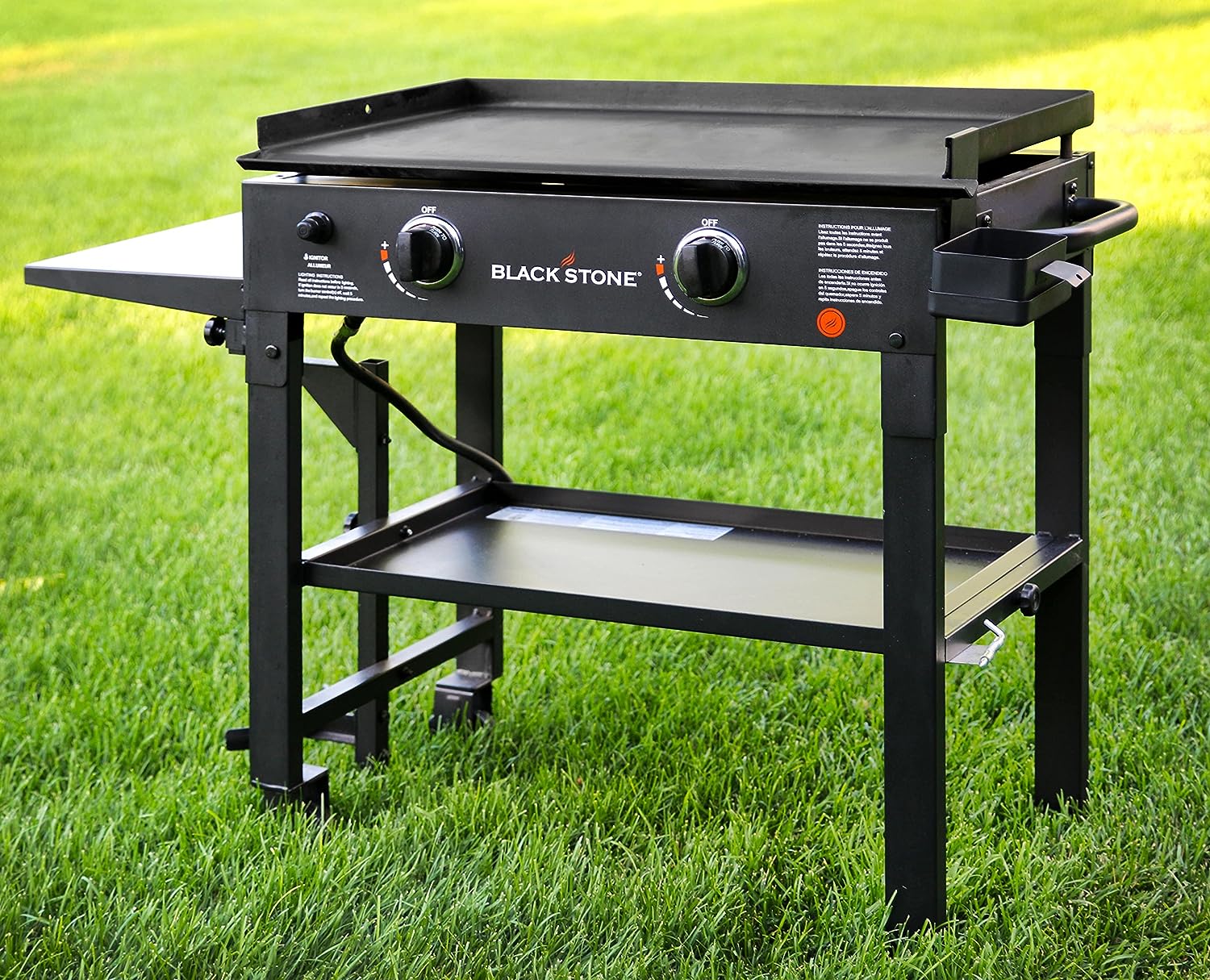